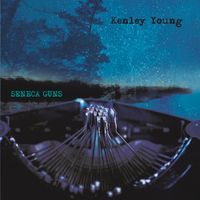 From the recording Seneca Guns

The light’s been faint now for so long--
It’s been so slow to dim and fail--
It might not ever really die at all.
Is that worse than living in the dark,
When I’ve got just enough light left
To see that I can move but have to crawl?

I am in the throes,
And if I have hit new lows,
Then let the lid be sealed.
We’re on a level field.
I spat back and fought,
And I did what you could not.
My eyes were never closed.

They say to strike first at the heart--
You should attack instead my spade
’Cause down here, nothing else will scare cold men.
It’s not for fear I’ll tunnel out;
It’s fear that I’ll dig deeper still,
’Til everything above me crashes in.

Some wretch inside me fights for ground.
He sees allies all around
And no reason he can’t win.

Sometimes I lie down when I’m spent
And stare up at the firmament.
I wonder if “escape” is the right word.
Why rush to get back to a place
Where dreams are spoken but ignored?
At least down here I know my dreams aren’t heard.